30 Oct 07 - Managed to catch a low tide at Changi after going back early from work for a change.

Also met with Mr & Mrs L... (who i met briefly with their kids at Labrador before I spotted the Nemo). Nice to see them exploring the intertidal and occasionally hearing excited exclamations when various specimens were seen.

Was plodding around stirring up the mud when my brother shouted out "eh squid...er...no Octopus!". (This being the last day of exams, the nieces had been invited along too and along came the parents as well.) True enough, there was a fist sized red octopus hunting in the seagrass/algae shallows. Lovely! all were enthralled by a real live wild octopus crawling around just a few feet away. Strange but this red octopus did not change colour or skin pattern during the few minutes we observed it. The video shows the octopus feeling around and causing a crab near a large sand dollar to flee in a flash.

Unfortunately, the 'biodiversity challengers' were out too. All prepared with dark phua-chu-kang boots. The seemed to be looking for hermit crabs and fan shells. The group looked like two skinny workers taking instructions from a rather plump male boss. 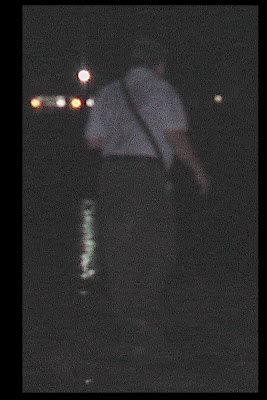 A lady waited at the high tide mark with fishing gear but only she wasn't preparing any fishing equipment. Maybe the group was looking for bait. Funny kind of bait they were intending to use. And funny time to fish from the high tide mark when it was a really low tide. Were they there for something else?

Also saw the 2 resident Aero2000 trucks parked at the carpark as usual as if the drivers lived at the beach. Talk about choice real estate.
Posted by sgbeachbum at 6:37 AM