West Coast Park has re-opened the beach access after a long long wait.

The beachfront is actually in three sections, two of which are divided by a pier looking out at the RSYC berths and the Poly Marina. 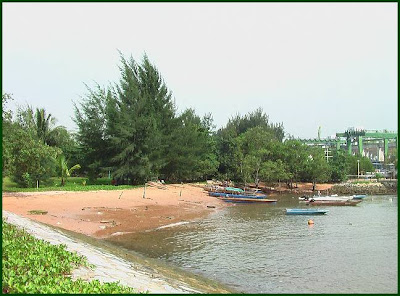 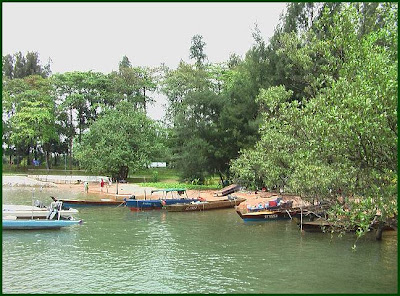 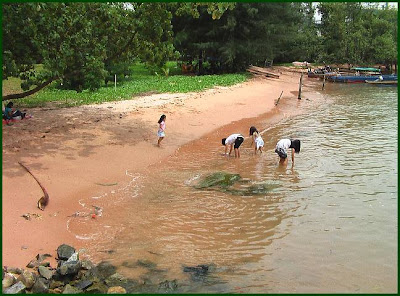 It even has a small rocky shore habitat!...very small though. 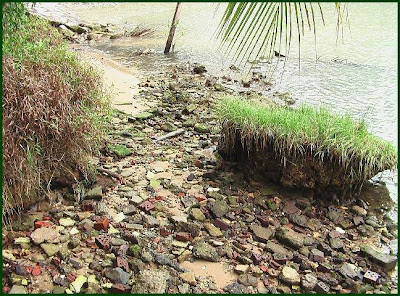 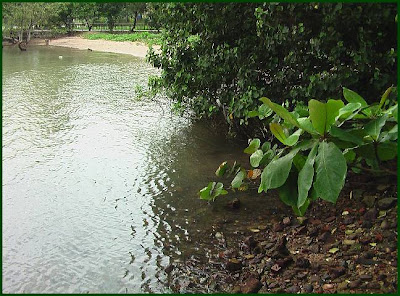 A small section of mangrove trees.... 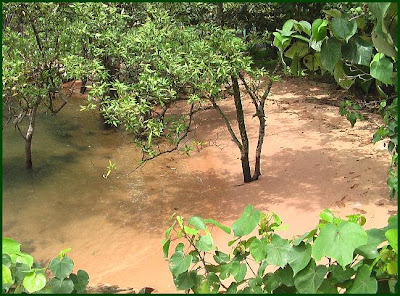 Local fishermen use the beach for boat maintenance. 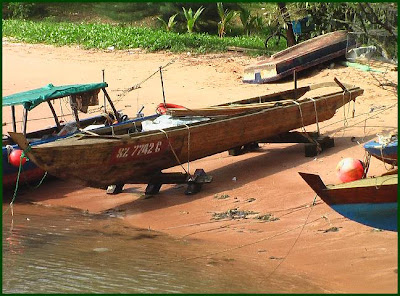 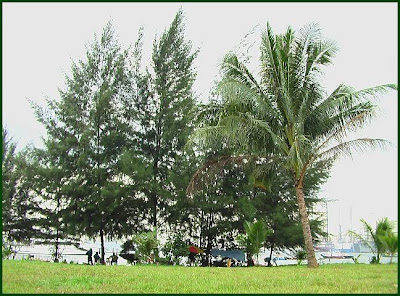 Posted by sgbeachbum at 7:51 AM No comments: 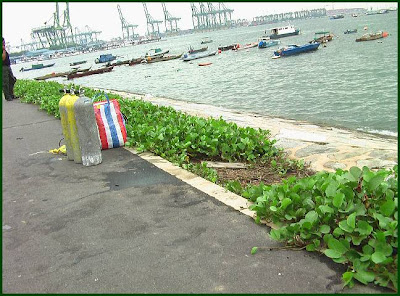 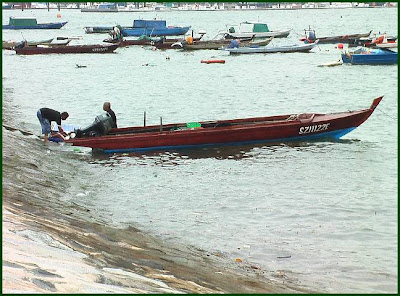 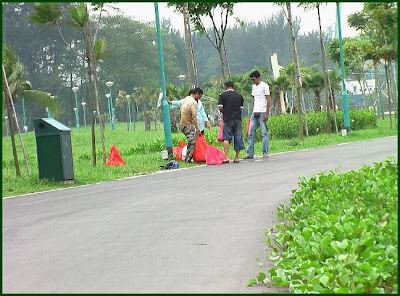 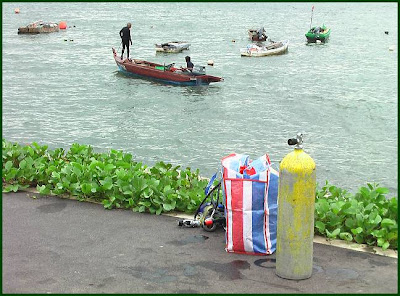 Looks like fishing is taking on a more deeper (pun intended) level... even scuba gear is now part of the fishing gear.
Posted by sgbeachbum at 7:02 AM No comments:

Friday 21st March 2008 - came across a group of rod/line fishermen surveying their catch from the night before... 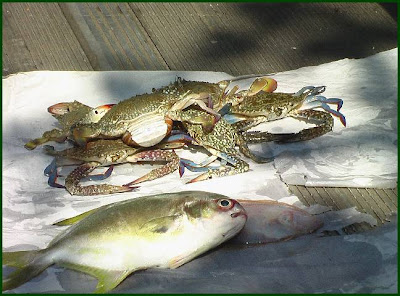 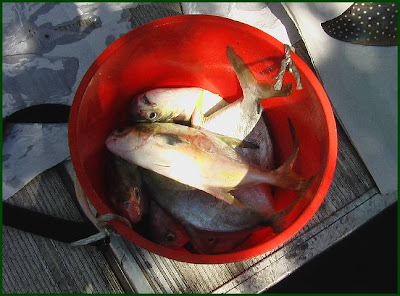 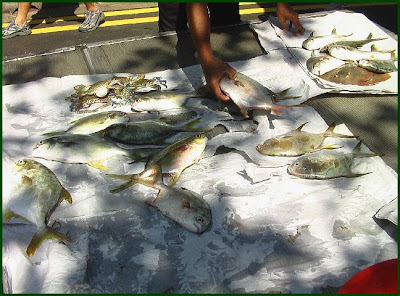 Note the size of the stingrays...rather small (about 20cm across) ...perhaps juveniles...(see pic above, the rays are at the top right) 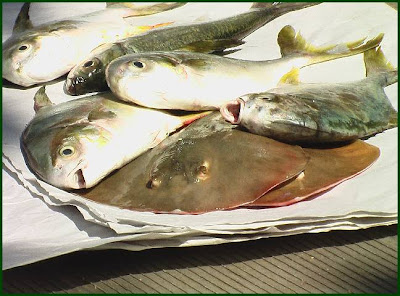 The catch included another unusual ray...a spotted eagle ray! It is actually rarely seen in Singapore waters. This was also rather small (about 40 cm across) . (The largest specimens can grow up to a maximum wingspan of 3 m (10 ft) and a mass of 230 kg)!!! 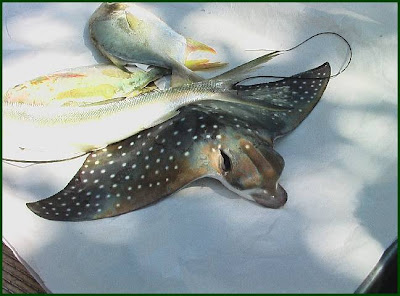 If the local fishing scene does not realise that removing juvenile fish will impact reproduction and future generations...then we will see fewer and fewer fish in local waters. And then people will get bored with fishing seeing that they catch nothing....the demise of the fishing scene beckons.

Know your fish! If a small fish is caught, then please throw them back alive and well so that they can be a part of the replenishing team for future generations. Take a picture with your phone camera and release the small ones. Only take the much larger ones if you have to!

This will ensure that local fish stocks survive.

The rays get even... (an unfortunate incident)...
Eagle Ray kills woman!
http://cbs4.com/local/marathon.stingray.woman.2.681445.html

Marine rubbish .. .the problem is getting bigger....and bigger.

The world's rubbish dump: a garbage tip that stretches from Hawaii to Japan http://www.independent.co.uk/environment/the-worlds-rubbish-dump-a-garbage-tip-that-stretches-from-hawaii-to-japan-778016.html

Why plastic is the scourge of sea life http://www.independent.co.uk/news/science/steve-connor-why-plastic-is-the-scourge-of-sea-life-778017.html

Clearing of fish nets at Chek Jawa. These are nets which have been left behind by former kampung residents or by fishermen or both. A Quick estimate : about 20 nets (at least) within a 50m stretch of intertidal. Bear in mind that most of these nets are themselves over 25metres long...some over 50 metres! All curled up and stuck in the mud, mangrove tree roots etc. Some of the nets already have thriving colonisers and we therefore leave them as is...so as not to disrupt the dependant organisms.

Abandoned nets continue to trap and kill indiscriminately reducing the biodiversity of the area. Commercially valuable species such as the Horseshoe crab frequently find themselves caught and soon starve to death. In other parts of the world, such nets have caused the deaths of larger animals such as dugongs. See http://teamseagrass.blogspot.com/2007/12/dugong-drowned-in-gill-nets.html

Short clip of some of the team doing their best early in the clean-up...before the mud, and slime, and other stuff got to us. One of the group even forgot to bring a change of clothes...he brought back some of the mud with him. Things got a bit too much muddy with mud flying all over (we all had some fly into our mouths! - bleah). Point to note : Keep mouth shut when messing about with abandoned nets!


In the meantime, Sekudu had some unscheduled visitors...
...there were some chaps who decided to fish in the *Chek Jawa Wetlands area ... 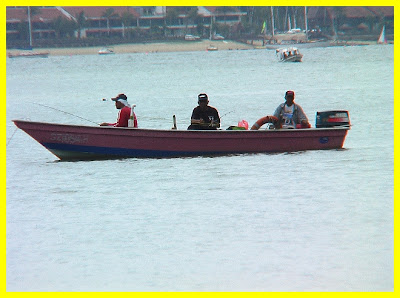 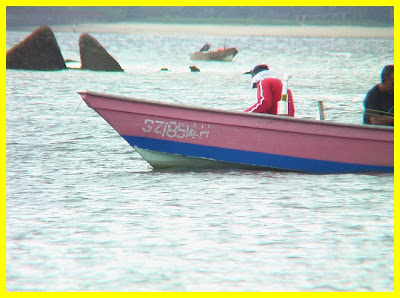 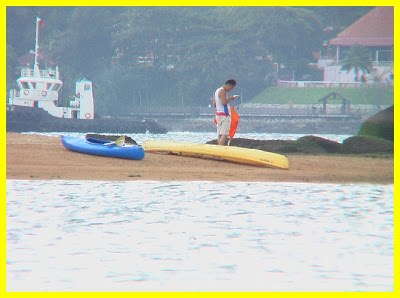 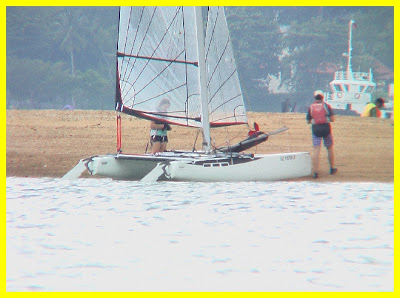 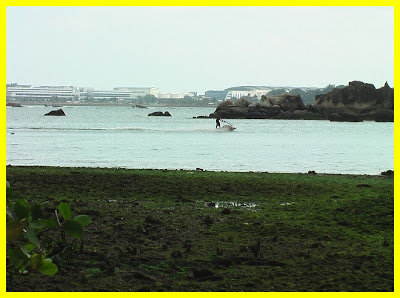 ...and also Mr Regular Poacher who could be seen dragging behind him a basket of some kind. Possibly filled with clams or mussels. Who knows what else he made off with? Imagine the destruction he would have caused by dragging his basket all over the intertidal, back and forth, to and fro, back and forth.... 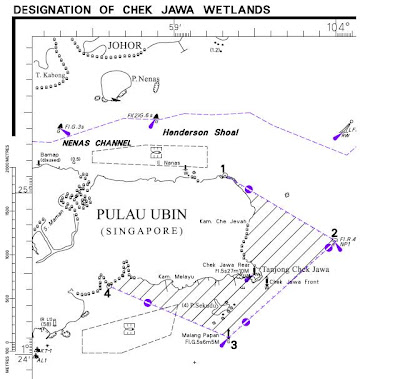 2 Chek Jawa Wetlands is a nature conservation area and the community is advised to observe the provisions of Parks and Trees Act 2005 and the Parks and Trees Regulations 2005. In particular, except where a permit has been obtained, the following regulations are to be observed by crew and passengers of all vessels:

i. No vessel or craft shall enter or remain in Chek Jawa Wetlands.

ii. No vessel or craft shall berth or moor at the jetty or floating pontoon or any other structure within Chek Jawa Wetlands.

iii. No vessel or craft shall land at Pulau Sekudu or anywhere within Chek Jawa Wetlands.

iv. There shall be no collection of any organism (including remains of an organism) or use of rods, lines, hooks, nets and traps within Chek Jawa Wetlands.

Last sunset of 2007 for Labrador 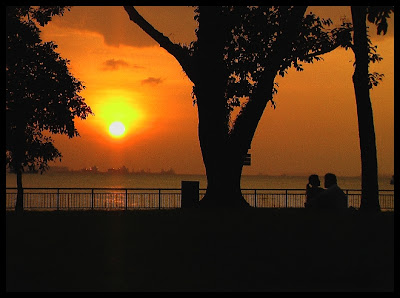 It was a magnificient sunset at Labrador for the last day of 2007.
What a wonderful place to be for the last sunset!
Let's hope 2008 will be a better year for Labrador Park.
May all park visitors appreciate and respect it's beauty and preserve it for others to cherish.
:)
Posted by sgbeachbum at 5:53 AM No comments: