Another wonderful day at Labrador Park and it's great new park extension.

The video speaks for itself. The Remora was caught by rod much like the sign on the railing.


The video was shot at the Tanjung Berlayar lookout pier opposite Keppel Club.
As the sign shows, this is a no-fishing zone. Or rather 'was' since no one was paying any attention to the sign. At least the old chap who caught the remora threw it back into the water.

Perhaps this whole section of Labrador Park should be 'a no-fishing-zone'. i.e the part from the lookout pier to the mangrove channel (Berlayar Creek)
A recent cleanup saw many fishing lines with hooks caught on rocks (not to mention many other foreign objects - most probably left behind during the construction of the park extension and pier.)

There was a new species of eel found today as well. This species lives on trees and resembles sun-dried seafood. ... someone had caught an eel and tied it to the tree with some fishing line. 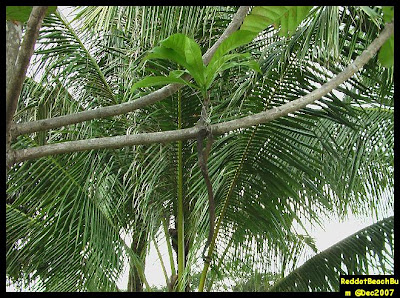 What a senseless waste of a living organism! ....the fisherman could have just thrown it back into the water if he did not want the eel.

Perhaps NParks could come up with a list of Dos and Don'ts for fishermen to follow...and there could also be more frequent friendly ranger patrols to educate the fishermen on the finer points of conserving the entire ecosystem and all the animals which play a part in the food chain.