A young couple came by whilst the Labrador spirit tormented the buoy. The new high fence was no match for the chap carrying a plastic (which i later found out to be filled with 2 turtles) bag.

The chap easily (whilst carrying the bag of turtles) climbed over and made his way along the outside of the fence and down to the beach where he promptly released both turtles. One dived headlong into the water and whilst the other hesitated before running into the waves.

Strangely, the one which dived headlong decided that it did not like the water after all and crawled it's way back up to the beach. 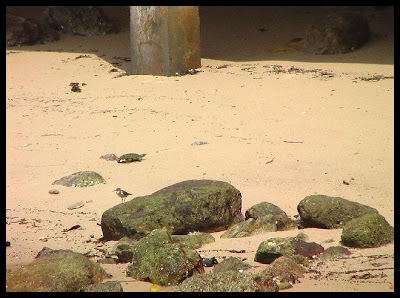 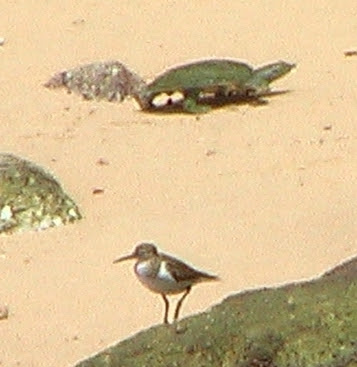 It headed for the shadows of the overhead walkway. The couple got up to leave and then I asked them if the turtles were sea turtles....to wit they said 'yes'. I replied that sea turtles do not walk but haul themselves around on 'flippers'. Most likely what they released were fresh-water turtles.

I then asked where they had bought the 'sea turtles'...and they said 'Chinatown market'.
A short explanation was offered about why the turtles being released (for prayer purposes) at a beach was not a good idea...as they would most surely die in such saline conditions given that they were not sea turtles.

And why buy and release turtles anyway? 'Traditionally, it's for good luck.' was the answer.

I can't imagine good luck being derived from releasing non-native animals to an ecosystem to which they are not suited to. The only good luck was that accruing to the person who sold the turtles and the monitor lizard or fish which was going to eat the turtles

The chap was keen to listen and agreed to rescue the released animals...After much looking around, he did locate one of the turtles. He bagged it and climbed back out. On closer view, it was a greenish clawed turtle with distinctive legs (not flippers) and a slightly long neck. Definitely not a sea-turtle with flippers.

The couple headed off to West Coast Park's Marsh Garden to release the re-captured turtle. At least Marsh Garden was brackish and not as saline as the open sea at Labrador Beach. Hopefully, they re-consider this practice and give it up without buying another turtle to bring them good luck.
Posted by sgbeachbum at 6:52 AM

Although some species of softshell turtles are capable of surviving in a marine environment, I am quite concerned about the ecological consequences should a population of non-native turtles become established in our nature reserves.

Thanks! :)
Incidentally, the RGS Seagrass Angels also spotted a turtle some time ago at Labrador. Looks like Labrador is a popular spot to release non-native and 'non-sea' turtles. :(